The History of Diving Museum Gets a Visit From Samuel L. Jackson

Hollywood star and executive producer Samuel L. Jackson together with producer Rick Esither Bienstock and film director Simcha Jacobovici visited the History of Diving Museum to see the “Diving with a Purpose” feature exhibit, which highlights several marine archaeology projects completed since 1991 in Florida including two slave ships, the “Henrietta Marie” that lies 35 miles off Key West and the “Guererro” that lies between the Florida Keys National Marine Sanctuary and Biscayne National Park. 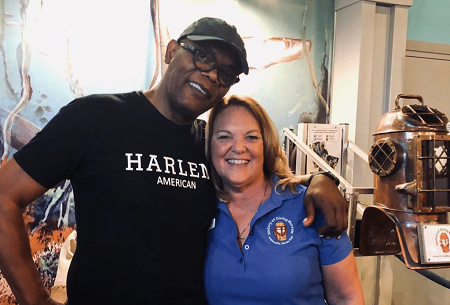 The visit came as part of a six-part documentary entitled “Enslaved: The Slave Trade as Told from the Ocean Floor,” which talks about the transatlantic slave trade and the atrocities inflicted upon the Africans who were taken as slaves.

Jackson who is a certified scuba diver will narrate the documentary where each one-hour episode will follow the slavery pathway from Africa to America. The show will highlight the maritime aspect of slavery, which is often overlooked in history.

During his visit, Jackson talked to the team leaders of the National Association of Black Scuba Divers who founded “Diving with a Purpose” where he learned about the beginnings of the foundation, its new findings and the cultural importance of the work they do. The archaeological work on these shipwrecks gave light to the difficult period in the lives of Africans who were brought to America as slaves and to offer closure for their families.

Diving with a Purpose was founded in 2004 to explore the African-American stories behind different shipwrecks. The foundation has worked on several projects with the National Park Service, the Florida Keys National Marine Sanctuary and the National Oceanic and Atmospheric Administration including the discovery of the wreckage of a plane flown by the Tuskegee Airmen during World War II.

The History of Diving Museum collaborated with the National Association of Black Scuba Divers to premier the Diving with a Purpose featured exhibit entitled “Restoring Our Oceans, Preserving Our Heritage,” which will be displayed until December 31, 2019.

This exhibit features underwater archaeology including the stories behind the Florida shipwrecks and their historical and cultural significance. The display covers underwater sites that feature slave ships and sailing vessels.